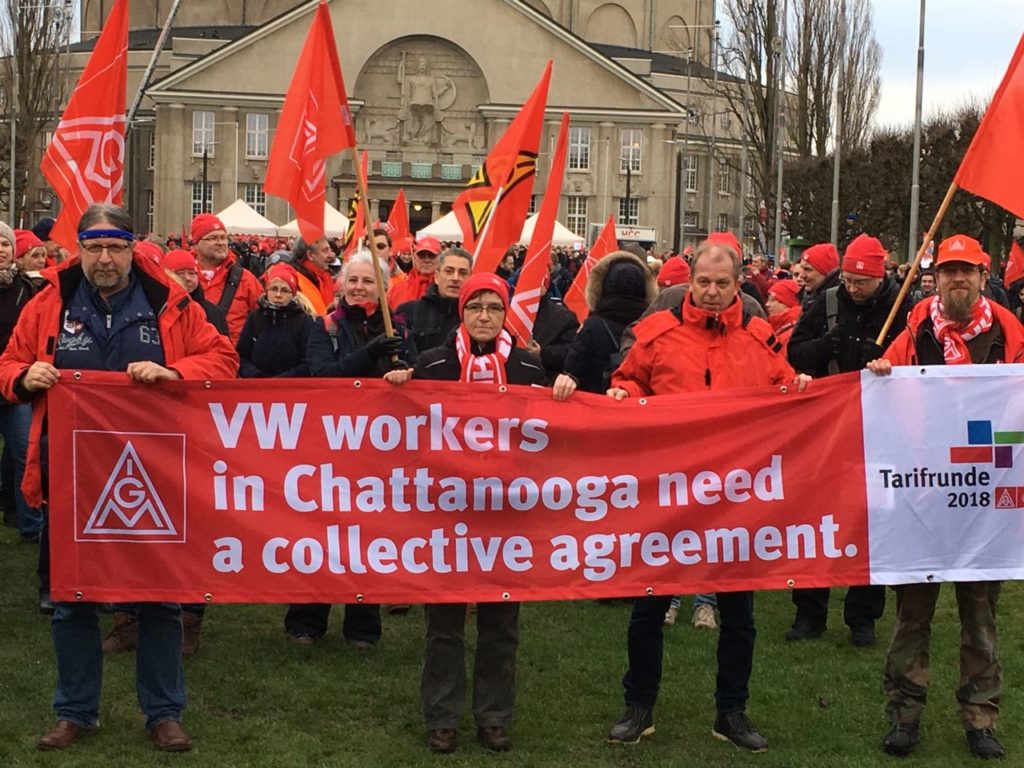 As the German autoworkers’ union IG Metall continued to negotiate with German carmakers, 20,000 workers at Volkswagen’s main plant in Wolfsburg walked away from production lines for two hours to express their determination for a fair collective bargaining agreement.  In all, a half million workers have participated in three days of strikes at German assembly plants, parts suppliers and other metal shops.

At Volkswagen, IG Metall is demanding a 6 percent pay raise, improvements in their pension plan, and a guarantee for apprentices to be employed after their examination.

Volkswagen’s refusal to collectively bargain with Local 42 in Chattanooga was highlighted by IG Metall in rallies and demonstrations around the country.  As the third round of talks with VW got underway on January 30 in Hannover, Germany, 5000 union members rallied to support their bargaining team.  Several carried a banner that read “VW Workers in Chattanooga Need a Collective Agreement!”  IG Metall Regional Director Thorsten Groeger noted Volkswagen’s behavior in his speech to the crowd:

“Colleagues, while collective bargaining here in Germany between IG Metall and Volkswagen is a normal thing, such negotiations are denied our colleagues in the VW plant in Chattanooga. Volkswagen even refuses to recognize a legitimately elected labor union. It is a scandal that on this entire planet Chattanooga is the only plant without union representation!”

The next day, with no agreement reached, thousands of VW workers engaged in 2-hour strikes around the country.  At the VW Kassel-Baunatal plant, over 6,000 workers participated and cheered IGM Local President Oliver Dietzel when he declared:

“While we are struggling to reach a collective agreement, our colleagues in the US, in Chattanooga, are also fighting for a collective bargaining agreement. But there, Volkswagen completely refuses. And colleagues, again, we say: they are not alone! They have our solidarity – and also there we expect from management: Come to your senses!  Talk to the colleagues! Because we want decent, collectively negotiated working conditions there as well.”

Auto workers across Germany continue to demonstrate their resolve to share in the extraordinary success of their companies.  IG Metall has offered to return to the bargaining table if the employers are serious about agreeing to a fair contract.  In the meantime, the union is preparing to hold a vote on calling an open-ended strike.