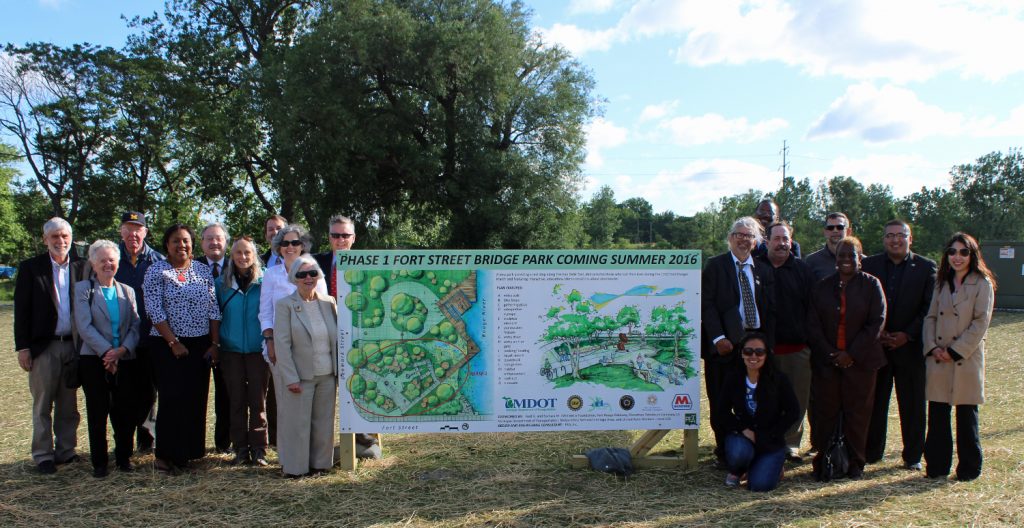 DETROIT – A large and diversified group of partners have come together to create an urban park in the middle of an industrial neighborhood, and they are seeking support from the community.

The Fort Rouge Gateway Project, or FRoG, is a partnership of 16 entities covering private enterprise, non-profit, local government and education. They have joined forces to create a “pocket park” and historical commemorative site in southwest Detroit in the shadow of the newly erected Fort Street Bridge.

They are seeking to raise $10,000 through a Patronicity campaign, www.patronicity.com/fortstreet which launches today. The funds will be matched 2 to 1 by support from the Fred A. and Barbara M. Erb Family Foundation.  The funds support design elements of the interpretive park, tucked into the northeast corner of Fort and Denmark streets adjacent to the Rouge River, including bike loops, an entry wall, environmentally friendly landscaping, seating and a rain garden.

The centerpiece of the park will be the interpretive signage recognizing the 1932 Hunger March – an event in history that served as a catalyst for the organized labor movement. On March 7, 1932, thousands of auto workers gathered at the Fort Street Bridge with the intent of marching on the Ford Rouge Plant. As the protesters neared the plant, a confrontation ensued resulting in dozens of injuries and 5 deaths.

Since that time, the original bridge has been dismantled but elements from the bridge have been saved, restored and will be incorporated into the interpretive artwork and signage adorning the park.

“Prior to getting elected I learned of and supported the FRoG project,” says Raquel Castañeda-López, Detroit City Councilwoman, D-6. “Having partially grown up in the Oakwood Heights neighborhood, I am excited to see investment in the community in the form of this beautiful park. The fact that the park will commemorate the 1932 Ford Hunger March makes this project even more special.”

Lloyd Baldwin, Historian for the Michigan Department of Transportation, says they envision this unique park site as a gateway to the rich, cultural landscape of Southwest Detroit.

“…while we couldn’t preserve the historic (Fort St.) bridge we wanted to find a way to preserve important stories associated with the bridge and its setting,” says Baldwin. “We are thrilled and proud to be part of the partnership creating this new park, a place to relax and a place to learn about the river in nature and in commerce, about the environment, and about the crossing’s role in the Ford Hunger March tragedy that proved to be a pivotal moment in American labor history. “

Other partners for this project include:

To donate and/or for more information, visit the Patronicity campaign site at www.patronicity.com/fortstreet

NNPA BLACKPRESS – OP-ED: To Labor Day and Labor Days Ahead