Heather McGhee: No One Fights Alone 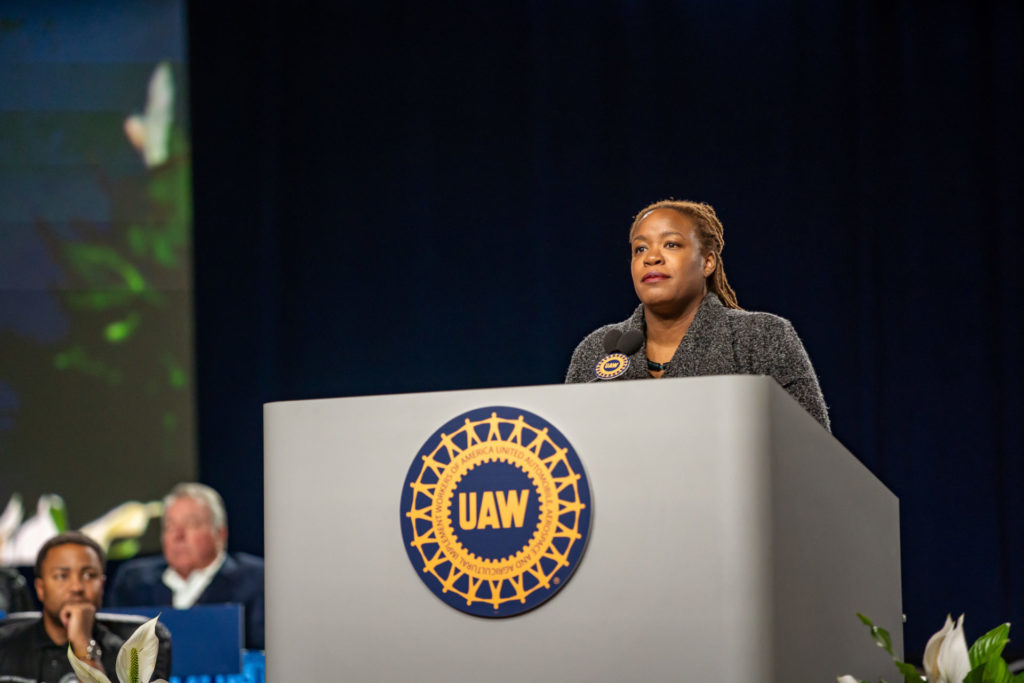 Social activist Heather McGhee says sowing dissention based on our differences is a tactic as old as the nation itself.

Our job, McGhee said, is to focus on our common interests such as equal opportunity, affordable health care and decent jobs, while at the same time shine a light on the ultra-wealthy and corporations that seek to divide us for their own greedy purposes.

“Your dedication and determination and work to leave no person behind is an inspiration to us all,” Williams said.

McGhee gave a stirring speech to convention delegates in which she recalled seeing a UAW sister’s T-shirt during a visit to Black Lake. It read: “No one fights alone.” Working Americans in many instances are fighting alone, she said.  At present, she added, half of all working Americans could not afford an unexpected $400 bill without going into debt or selling something.

Fighting alone is no way to win, she told delegates, adding that UAW members have always known that there is strength in linking arms and fighting for a better life. As a result, the UAW played a huge part in building a great American middle class, something her generation has benefited from.

“I also stand before you as a member of the generation who may see all those gains stripped away,” she said.

Instead, people of all races, genders, sexual identity, and religions should fight together to push back against those who seek to exploit our differences and scapegoat the poor and minorities. “We have to stand up for each other, my brothers and sisters,” McGhee added. “The time is dire.”

A Majority of Boston College Graduate Workers and Over 3,000 Community Supporters Call on University President Father Leahy and The Board of Trustees to Stop Punishing Workers and Bargain Now