To: President of the Republic of Korea, Moon Jae-in

Since December 2015, Han Sang-gyun, former President of the Korean Confederation of Trade Unions (KCTU), has been incarcerated.  In November 2015, Lee Young-joo, former General Secretary of the KCTU confined herself in the KCTU office to avoid execution of an arrest warrant. In December 2017 she was arrested after leaving the office to protest Han’s incarceration. The charges against both unionists relate to organizing a public protest against regressive labor law reforms put forth by the government of former South Korean President Park Gyun-hye.  For over two years, these trade unionists have been denied the right to sit down at the dinner table with their families. Several other South Korean trade union leaders remain incarcerated as well.

President Moon, you are well aware of what it is like for President Han, General Secretary Lee and the other trade unionists to suffer in jail and be denied access to their families and loved ones. You too were imprisoned once, by former President Park’s father, a military dictator, after you organized student protests. But you persevered and went on to become a formidable human rights lawyer, defending others in similar situations.

President Moon, you can be a global leader by committing your government to upholding human and labor rights. Show the world that your government acts in accordance with the values that you have espoused throughout your career. Release KCTU President Han, General Secretary Lee and the other unjustly charged and imprisoned trade unionists immediately.

Han Sang-gyun is elected president of the Korean Confederation of Trade Unions (KCTU).

KCTU carries out a mass demonstration opposing the legislation. Over 100,000 people participate. The police respond by using a battery of water cannons and pepper spray devices against peaceful marchers. A 69-year old farmer dies after being hit by a police water cannon.

The Park government sends police to raid union offices, including the Korean Metal Workers’ Union (KMWU) and the KCTU. They seize documents, equipment, computers and data storage.  More than five hundred trade unionists and other protesters are arrested.  Han flees to a Buddhist temple in Seoul.

Police surround the temple.  KCTU General Secretary Lee Young-joo avoids arrest by remaining in KCTU headquarters. She would remain there for over two years.

Han is sentenced to five years in prison.

UAW participates in an international delegation to visit Han in jail and march with Koreans protesting the corruption of the Park Government.

UAW, USW and AFL-CIO hold a protest action in front of the South Korean embassy in Washington D.C. calling for the immediate release of all incarcerated trade unionists. 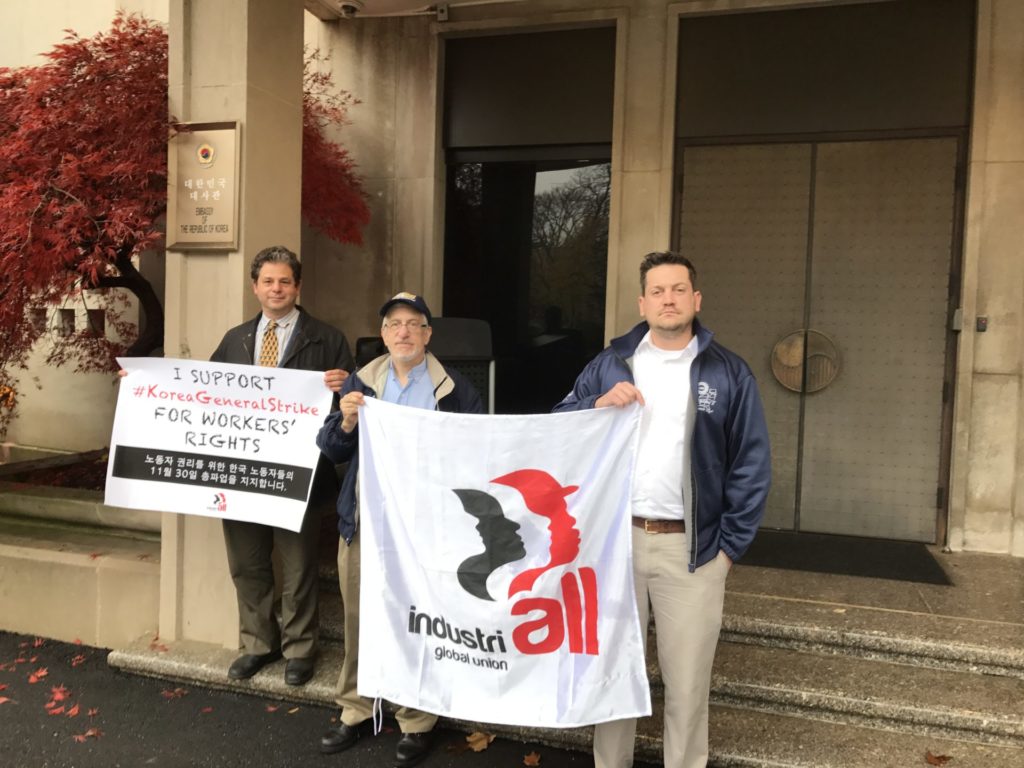 The UAW delivers a letter from President Dennis Williams.

The UAW International Executive Board unanimously passes a resolution calling on the Government of the Republic of Korea to rescind all sentences and drop all charges against trade unionists that are related to peaceful protest, including those against President Han and General Secretary Lee.  UAW President Dennis Williams presses newly elected Korean President Moon Jae-in to free Han and “restore labor rights and dignity to the working people of Korea.”

On December 18, 2017 General Secretary Lee left the KCTU office for the first time in over two years.  She went with other KCTU activists to the offices of President Moon’s ruling Minjoo (Democratic) Party.  They staged a sit-in hunger strike, demanding Han’s release and the cancelation of the warrant against Lee.  They demanded an end to an interpretation of the labor law that permitted employers to require nearly unlimited amounts of overtime work on weekends without paying an overtime premium.  The sit in Hunger strike lasted ten days.

KCTU Sit in and Hunger Strike 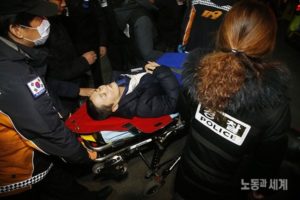 General Secretary Lee was arrested on December 27 and taken to a hospital, where the police questioned her.  The prosecutors applied for a detention warrant, which the court issued on December 30.  Pursuant to the detention warrant, she was moved to the Seoul Detention Center.  It is expected that she will stand trial beginning in February or March. The charges against her area almost identical to those against Han. 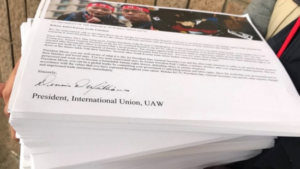 A UAW representative traveled to South Korea to try to secure the release of Lee and Han. The representative met with the jailed leaders and delivered letters and petitions to the US Embassy.