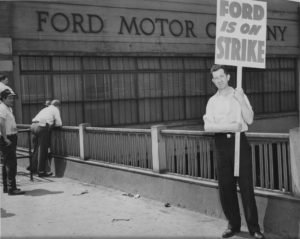 As demand for his Model T skyrocketed, Henry Ford embarked on an ambitious project to build the world’s largest industrial complex. The Ford Rouge Plant in Dearborn, Michigan, housed everything needed for automobile production in one massive complex – from refining raw materials to assembly line.

But Henry Ford’s demands soon took a toll on Ford workers, who had few rights within the plant. Workers who complained were often fired. At the same time, the economy was badly hurting after the 1929 stock market crash. Unemployment in Detroit skyrocketed and wages fell over 50 percent. 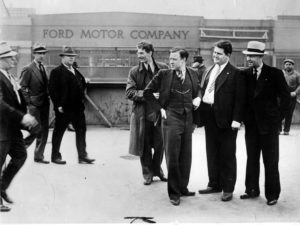 On March 7, 1932, thousands of people gathered in the cold to March from Detroit to the Rouge Plant. The gathering soon turned violent when marchers were met by Dearborn police and Ford security guards. Even as demonstrators retreated, police and Ford security opened fire. Four men were killed that day, a fifth died three months later from gunshot wounds and 22 others were wounded by gunfire. The New York Times wrote of the event, “Dearborn streets were stained with blood.”

Five years later, on May 26, 1937, the Rouge Plant was the battleground for violence when labor organizers clashed with Ford security guards over a leafleting campaign called “Unionism, Not Fordism.” UAW organizers Walter Reuther and Richard Frankensteen were posing for a newspaper photographer on the Miller Road overpass when Ford Service Department goons attacked them and beat workers in the crowd, including women. One man’s back was broken. The Battle of the Overpass and the photos of the beatings increased public support for the UAW organizing drive. 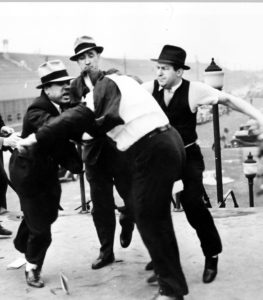 By 1941, Ford Motor Co. remained the last Big Three holdout in recognizing the UAW as the unified voice for its workers. In April Harry Bennett, head of Ford’s Service Department, fired eight union members and sparked a massive sit-down strike that blocked scabs from crossing the picket line. After ten days of impasse Henry Ford’s wife, Clara, urged her husband to do right by his employees and ensure a future where her children could take over the Ford business. Finally, Henry agreed to a collective bargaining agreement with the UAW. It was a major victory for workers, who knew collective action was the only way they could better their families’ lives. 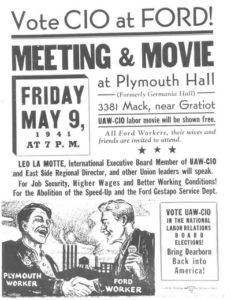 The first UAW-Ford negotiations concluded on June 20, 1941, when an agreement was signed.  Since then, there have been 25 agreements addressing issues such as wages, pensions, health care, health and safety, life and disability insurance, tuition reimbursement and many others negotiated between both parties.

Article and Video by Denn Pietro