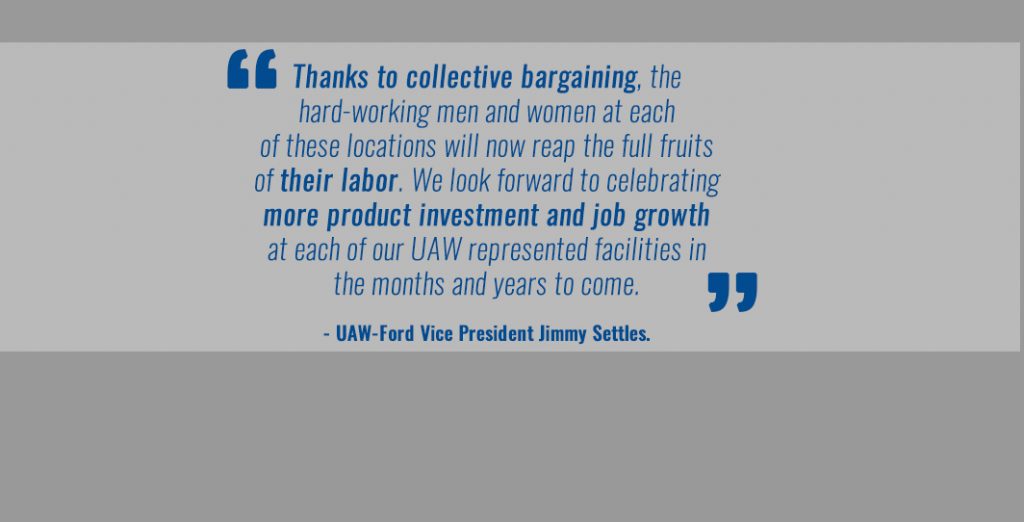 DEARBORN, Mich., March 28, 2017 – Ford Motor Company is investing $1.2 billion in three Michigan manufacturing facilities to strengthen its leadership in trucks and SUVs and support the company’s expansion to an auto and mobility company.

The company also plans to create or retain 130 jobs and invest $150 million to expand capacity for engine components for several vehicles, including Ranger and Bronco, at Romeo Engine Plant in Michigan.

In addition, Ford is investing $200 million for an advanced data center to support the company’s expansion to an auto and a mobility company. It is the second of two new data centers Ford is building in Michigan, as the company expects its data usage to increase 1,000 percent – driven by manufacturing and business needs and new mobility services, such as more connected, autonomous and electrified vehicles.

The second new data center will be located at Ford’s Flat Rock Assembly Plant, where the company is investing $700 million and adding 700 direct new jobs – announced in January – to create a factory capable of producing high-tech electrified and autonomous vehicles.

“At Ford, we are investing aggressively in building on our strengths today – including trucks, vans, commercial vehicles, performance vehicles and SUVs – while at the same time growing our leadership in electrification, autonomy and mobility services,” said Joe Hinrichs, Ford president, The Americas. “As America’s top producer of automobiles, we are proud to be going even further in our commitment to invest in manufacturing here at home.”

The company’s investments are supported by Ford’s strong partnership with the UAW, as well as with federal, state, county and local governments.

“UAW-Ford is proud of the total investments in three of our Southeast Michigan assembly and engine plants, which will lead to stronger job security for our members and continued support for the surrounding communities,” said UAW-Ford Vice President Jimmy Settles. “Thanks to collective bargaining, the hard-working men and women at each of these locations will now reap the full fruits of their labor. We look forward to celebrating more product investment and job growth at each of our UAW represented facilities in the months and years to come.”

In the past three months alone, Ford has announced $1.9 billion in new investments in Michigan. During the past five years, Ford has invested $12 billion in its U.S. plants and created a total of nearly 28,000 U.S. jobs.

Ford builds more vehicles in the United States and employs more hourly U.S. workers than any other automaker.

The work to transform Michigan Assembly Plant begins next May. Following the same pattern used during vehicle changeover at Dearborn Truck Plant in 2014, Michigan Assembly will take just four weeks to remove and reinstall the tooling necessary to build the all-new Ford Ranger and Ford Bronco.

The iconic Ranger and Bronco will further expand Ford’s truck and SUV leadership in North America – two of the company’s profit pillars.

Rugged utilities have been the second fastest-growing SUV segment during the last five years, making it the time right for Bronco’s return – especially with its legendary 4×4 off-road capability.

In North America alone, Ford has invested more than $3.8 billion to develop more than 30 engines since 2009, when the company introduced its first EcoBoost® engine. Since then, Ford has produced more than 8 million engines globally with the fuel-saving technology.

Data center supports auto and mobility company expansion
As Ford expands to be both an automotive and mobility company, the company’s data storage requirements are expected to increase from 13 petabytes today to more than 200 petabytes in 2021. This is especially true as Ford grows its leadership in connectivity, autonomous vehicles, electrification and mobility services.

The new data centers are helping Ford create a world-class infrastructure for storage, processing and integration of this data.