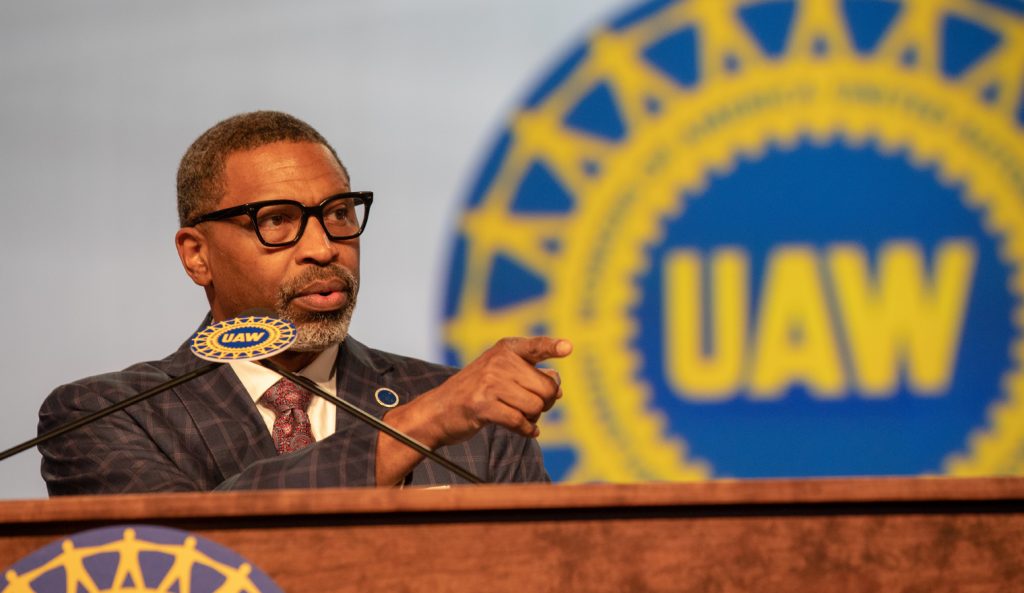 Day One of the historic UAW 38th Constitutional Convention ended with the passage of amendments to the UAW Constitution to align the language with the recent referendum on direct elections of the UAW International officers and regional directors.

Democracy was in full show as delegates debated resolutions and amendments.  A resolution calling for ranked choice voting was defeated, and members instead adopted runoff elections in the event there is no clear majority winner in elections for UAW International officers or regional directors.

Speaker and longtime UAW ally, NAACP President and CEO Derrick Johnson stirred delegates with a reminder of the importance of solidarity in the face of distractions.

“When we keep democracy strong, we can keep capitalism in check,” Johnson told convention delegates. “Are you going to focus on what’s bad or remain united on what is possible? You have made possible what others thought was impossible,” Johnson said.

Following the speech, UAW President Ray Curry presented Johnson the Owen Bieber Social Activist award, which is one of the union’s highest honors and given to individuals who advance the cause of freedom, justice, equality and human dignity. Johnson is formerly from Detroit and has helped steer the NAACP through a period of re-envisioning and reinvigoration.

“I call Derrick Johnson a personal friend and an inspiring ally in the fight for social justice. He has stood with us on organizing campaigns and on picket lines,” said Curry.

“This was the first day of our convention after our union’s darkest hours,” said Curry. “We used the time to thoroughly debate, find consensus and lay the foundation for a stronger UAW.”

The convention resumed at 9 a.m. today.