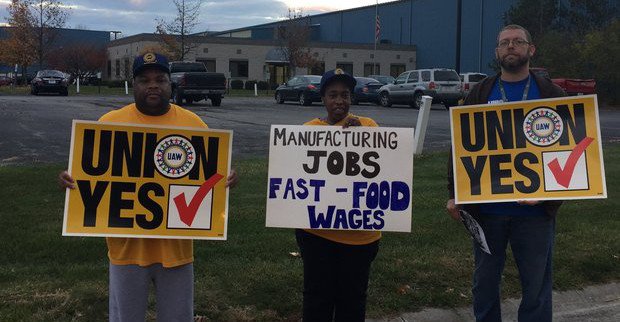 Facing Pay as Low as $8.50/Hour, Workers Who Make Auto Parts for Ford, GM, Toyota and Mercedes Vow to Do Whatever It Takes to Win Fair Pay, Good Jobs to Lift Local Economy

Dayton, Ohio – Auto parts workers at the Creative Foam plant in Dayton, who are paid as little as $8.50/hour, announced on Thursday that they are seeking to join the UAW in an effort to win higher wages and improve working conditions.

Most production workers at the Dayton plant see their wages capped at $12.75/hour, regardless of how much skill or experience they gain on the job. In addition to low pay, the plant often delays hiring workers as permanent employees, locking them into temporary positions with no benefits for up to eight months.

“I’m the father of two teenage girls, but I almost never get to see them because I have to work close to 70 hours a week just to make enough to raise them,” said Doug Thompson, a forklift operator at Creative Foam who is paid $12.75/hour. “That’s why we’re joining together to win fair pay and have a voice in the workplace. We can’t wait any longer.”

By joining together and speaking out for higher pay, workers at the Dayton plant have already started to win improvements: Last week, nearly two dozen workers marched into the plant’s quarterly meeting and read a letter aloud to senior management detailing the workers’ demands for fair pay and good jobs. The company’s executives promised an immediate one-dollar raise for all of the plant’s production workers.

“Creative Foam manufactures parts for billion dollar companies like Ford, GM, Toyota and Mercedes, but I’m paid not much more than a McDonald’s cook or Walmart cashier,” said Veronica Laster, a trimmer at the Creative Foam plant who is paid $10.50/hour. “We can’t expect good jobs by sitting back and waiting – that’s why we’re standing together and speaking out, and we’re not giving up until we win.”

The organizing push at the Creative Foam plant comes as growing numbers of autoworkers in Dayton and across Ohio are speaking out against the low pay and unsafe conditions at auto parts plants, which now employ three out of every four workers in the auto industry.

In May, workers at the Fuyao Glass plant in Dayton filed a complaint with the federal government calling for a “wall-to-wall” investigation into a wide range of dangerous conditions found throughout the factory, including fire hazards, electrocution risks, and laceration injuries. In April, workers who had planned to walk off their jobs at an Avon, Ohio auto parts plant called off the strike after their employer, Detroit Chassis, agreed to their demand to join the UAW.

Jobs at the Creative Foam plant are a microcosm of the pay cuts facing workers throughout America’s manufacturing industry. More than one-third of all frontline factory workers now rely on public assistance programs like food stamps or Medicaid to support themselves or their families, according to a recent study by the University of California- Berkeley. One in four manufacturing jobs in the U.S. now pays less than $11.91 an hour, and wages in the auto industry – the largest segment of America’s manufacturing base – have fallen far faster than the rate for all other jobs over the past decade, according to a report by the National Employment Law Project.

Union Plus – Looking for gift ideas this holiday season?