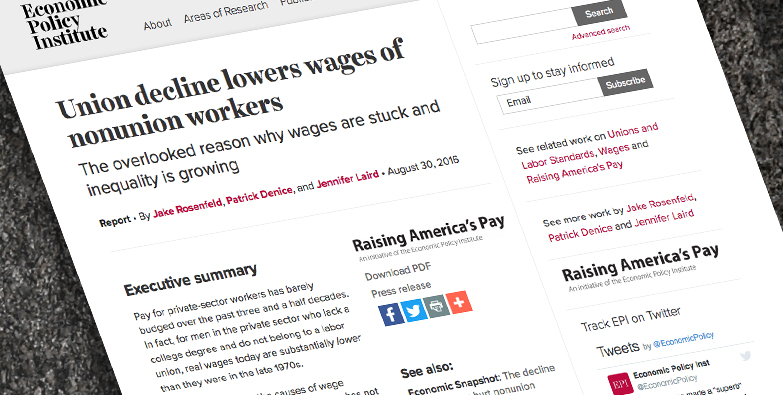 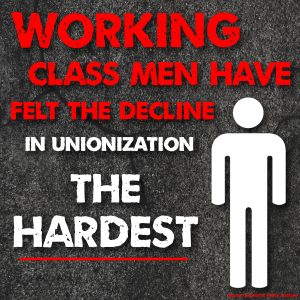 In the new report, Union decline lowers wages of nonunion workers: The overlooked reason why wages are stuck and inequality is growing, Washington University sociologist Jake Rosenfeld and co-authors find that the dramatic decline in union density since 1979 has resulted in far lower wages for nonunion workers, an impact larger than the 5 percent effect of globalization on their wages found in recent research. Specifically, nonunion men lacking a college degree would have earned 8 percent, or $3,016 annually, more in 2013 if unions had remained as strong as they were in 1979.

Between 1979 and 2013, the share of private sector workers in a union has fallen from about 34 percent to 11 percent among men, and from 16 percent to 6 percent among women. The authors note that unions keep wages high for nonunion workers for several reasons: union agreements set wage standards and a strong union presence prompts managers to keep wages high in order to prevent workers from organizing or their employees from leaving. Moreover, unions set industry-wide norms, influencing what is seen as a “moral economy,”

“Working class men have felt the decline in unionization the hardest,” said Rosenfeld. “Their paychecks are noticeably smaller than if unions had remained as strong as they were almost 40 years ago. Rebuilding collective bargaining is one of the tools we have to reinvigorate wage growth, for low and middle-wage workers.”

Rosenfeld, along with co-authors Jennifer Laird and Patrick Denice, find that the effects of union decline on the wages of nonunion women are not as substantial 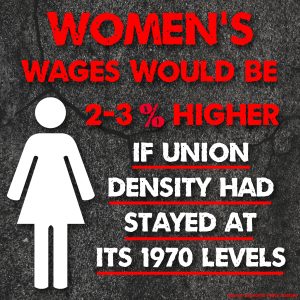 because women were not as heavily represented in unionized private sector jobs. The authors note, however, that any substantial growth in collective bargaining would be expected to have as much or more impact on women as men. Specifically, the authors find that women’s wages would be 2 to 3 percent higher if unions had stayed at their 1979 levels. Their study also reveals that private sector nonunion men of all education levels would earn 5 percent ($52) higher weekly wages in 2013 if private-sector union density (the share of workers in similar industries and regions who are union members) remained at its 1979 level, an increase of $2,704 in annual paychecks for full-time employees.

This is the first study providing a broad estimate of the wage decline for nonunion workers as the result of the erosion of unions.

This decline in unions has eroded wages for nonunion workers at every level of education and experience, costing billions in lost wages. For the 32.9 million full-time nonunion private sector

women and 40.2 million full-time private sector men, there is a $133 billion loss in annual wages because of weakened unions.

Given dramatically weakened unions, their effect on nonunion wages has declined over time: these effects have fallen to between one-half and two-thirds of their late-1970s levels.

“Unions have functioned to raise the wages of all workers, union and nonunion,” said Lawrence Mishel, EPI President. “The erosion of collective bargaining has clearly taken a huge toll on nonunion wages in the United States, and is a major factor in the wage stagnation of the last four decades.”