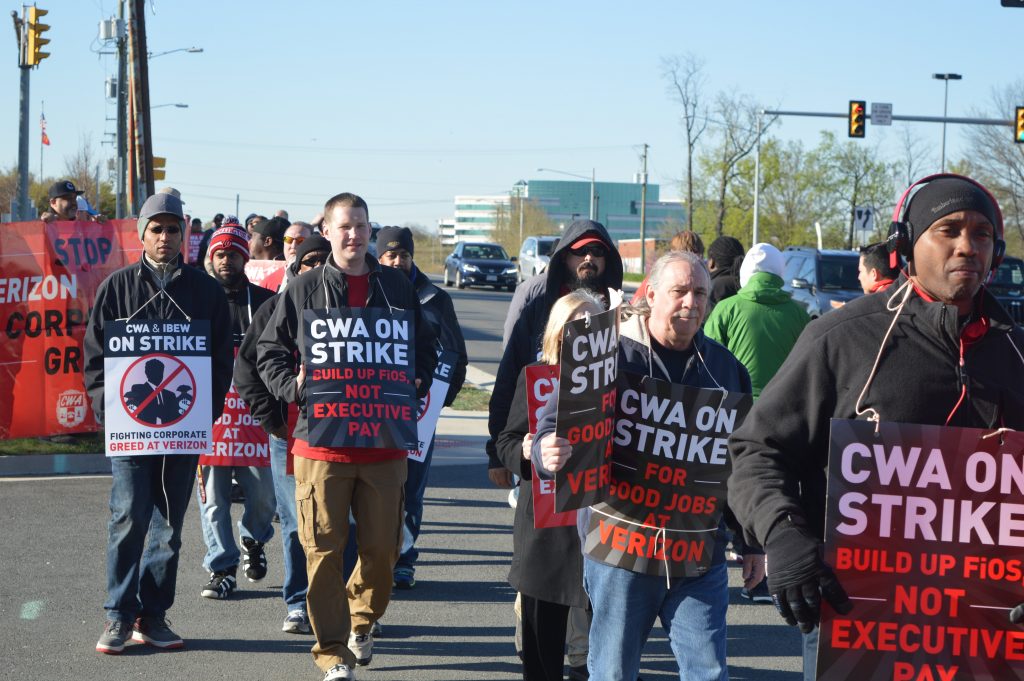 For updates go to standuptoverizon.com

After ten months trying to reach a fair contract, nearly 40,000 Verizon workers from Massachusetts to Virginia walked off the job at 6 a.m. on Wednesday. The Verizon strike is by far the largest work stoppage in the country in recent years.

Despite making record profits — $39 billion in profits over the last three years — Verizon executives have been pushing to offshore jobs to the Philippines, Mexico and other locations, outsource work to low-wage contractors and transfer workers away from their families for months at a time.

Verizon workers, who are ready to help install promised FiOS lines, the high-speed broadband service, are also frustrated with the company’s delay in providing the much needed service to customers. For years, Verizon has been cutting vital staff — it has nearly 40 percent fewer workers now than a decade ago — and has failed to hire the personnel necessary to properly roll out the service.

“Our families and our customers deserve more from Verizon,”said Isaac Collazo, a technician and CWA member from Brooklyn, N.Y., who has worked at Verizon for 19 years. “Through our hard work, Verizon is making record profits while our families are left with threats to our jobs and our customers aren’t getting the service they need. Striking is a hardship for our families, but we need to remind Verizon executives that the people who build their profits are a critical reason for the company’s success.

Verizon workers, represented by the Communications Workers of America (CWA) and the International Brotherhood of Electrical Workers (IBEW), have been working without a contract since August 1, 2015 while Verizon executives, who have brought home hundreds of millions dollars in the last few years, have been insisting on:

As the workers have intensified their campaign to protect good jobs in America, public support for a fair contract has grown. Last month, 20 U.S. Senators sent a letter to Verizon CEO Lowell McAdam calling on him to “act as a responsible corporate citizen and negotiate a fair contract with the employees who make your company’s success possible.”