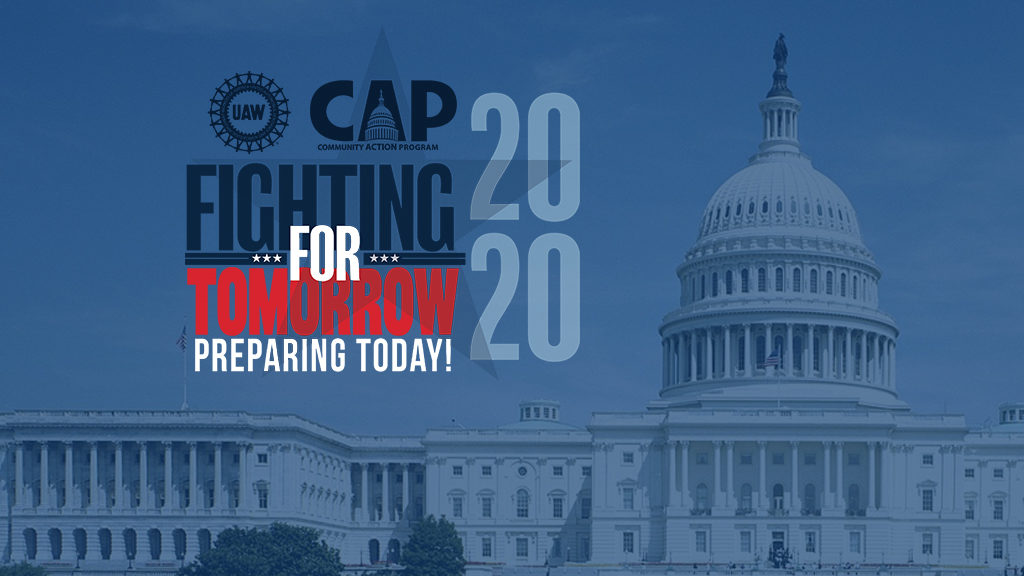 The work for CAP activists on their visit to House lawmakers on Tuesday will be to lobby them on key UAW priorities, including:

Fighting economic inequality: TCJA’s backers promised that it would spur corporate investment and the benefits would trickle down to workers. The reality is that in 2020 more than 70% of the benefit goes to the richest 20% of people. The richest 1% get an average tax cut of $50,000, 75 times more than the average tax cut for the bottom 80%, which is $645.

“The concentration of wealth in this country is worse than it has been in 100 years,” Nassar said.

In the Senate, CAP activists will ask senators to:

Address health care/retirement income issues: President Trump in 2015 vowed not to cut Medicare, Medicaid and Social Security. Last month, he said cuts to “entitlements” will be considered. Activists will also ask senators to address the high cost of prescription drugs by passing H.R. 3, The Lower Drug Costs Now Act that passed the House and has not been considered by the Senate.

CAP activists will ask both chambers to:

Improve labor rights: Lawmakers will be asked to support the PRO Act, and the Public Service Freedom to Negotiate Act. The PRO Act holds union-busting bosses accountable, safeguards the right to strike, prohibits captive audience meetings and repeals so-called “right-to-work” laws. The Trump administration has also rolled back many labor regulations important to workers, including salaried overtime standards, workplace injury rules and numerous health and safety standards. The House is expected to vote on the legislation this week. The Public Service Freedom to Negotiate Act seeks to undo the disastrous Supreme Court decision in Janus v. AFSCME, which undermined public-sector workers in their fight for decent pay and fair workplaces. The legislation would guarantee every public service employee in every state has the freedom to stand together and negotiate for fair wages and working conditions.

Send a message from the heart with a hand-arranged Valentine’s Day bouquet! UAW members save 25% with Union Plus.