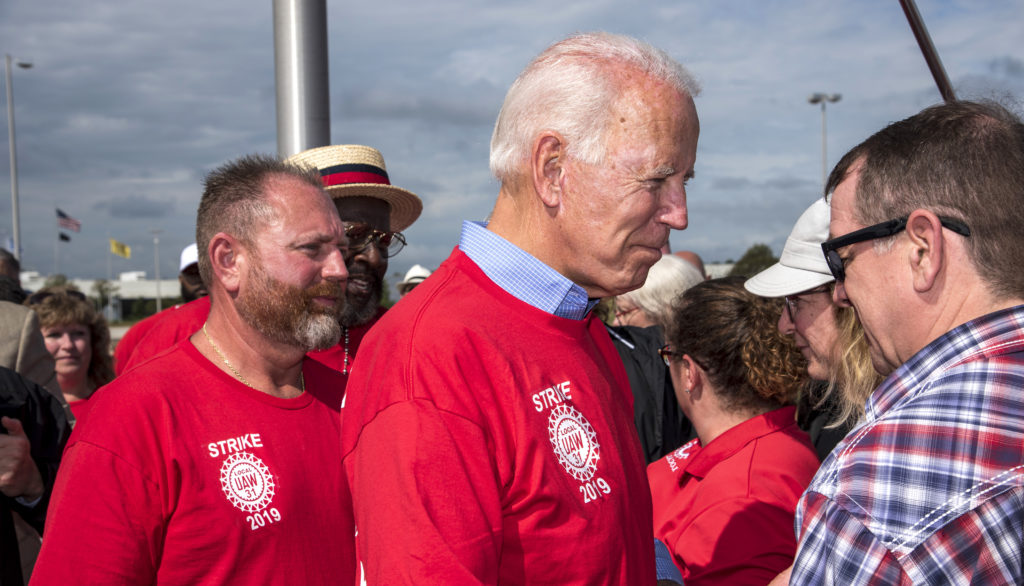 Former Vice President reminds Americans that we can do better

On the final day of the convention, UAW members and their messages were featured prominently and Joe Biden accepted his party’s nomination with an inspirational speech reminding Americans that, “We make our greatest progress when we follow the light,” and turn away from the darkness and division that the nation finds itself mired in.

Earlier in the evening, UAW President Rory L. Gamble addressed the DNC’s Labor Caucus. Gamble stressed Biden’s long record of standing with labor.  “It is his understanding of the needs of UAW members and all working men and women that motivated him to insist on saving General Motors and Chrysler during the auto crisis when others said, ‘let them die.’ Joe just said, ‘NO.’ ”

During the DNC program, Biden himself interacted with UAW General Motors Local 5960 Vice President Gerald Lang. Lang thanked the union for working to keep him and his family safe during the pandemic. He told Biden, “Americans just want to live meekly, comfortably. I’ve got a wife that works as well. We’ve got a 17- and a 7-year-old at home,  and we’re still working.”

Biden, who told Lang that unions built America said, “”I tell you what, the future of autoworkers in America, and I really believe this, can be as bright as it was back in the late ’40s, ’50s. Simple reason, it’s an iconic industry, it’s an American industry. We made it. We made it.”

Biden’s economic plan includes a plan to create 1 million jobs across the U.S. auto industry by concentrating on electric vehicles and new technology.

“What I think speaks volumes about Vice President Biden,” Gamble said, “is that he can talk to or feature anyone he wishes to — but he made time for Gerald Lang and other working Americans to personally interact with them at this convention. That’s the Joe Biden UAW members have always known.”

For Biden, it was a night to give the world and UAW members his vision of America’s future. “I give you my word: If you entrust me with the presidency, I will draw on the best of us, not the worst,” he said, adding that the United States faces four “four-star” problems with a raging pandemic, a subsequent economic disaster, systemic racism and climate change. But more than that, he said this election was about the soul of America and what kind of nation the United States will be for many years to come.

“Are we ready? We must be,” he stressed. “We know in our bones this one is more consequential.”

The former vice president said this moment in the country’s history also calls out for the nation to finally deal with racial injustice in a lasting way so America can finally live up to the promise of its founding documents.

In another nod to UAW members, Sen. Cory Booker, D-New Jersey, said he was able to succeed because his grandfather moved to Detroit, and joined the UAW when he was hired at an auto plant.

“I’m here because a union job lifted my family out of poverty, into the middle class,” he said. His address focused on the vast income inequality in America and how the Biden-Harris ticket would address it.

“At the end of the day, preserving democracy isn’t just our job,” Benson said. “It’s yours.”