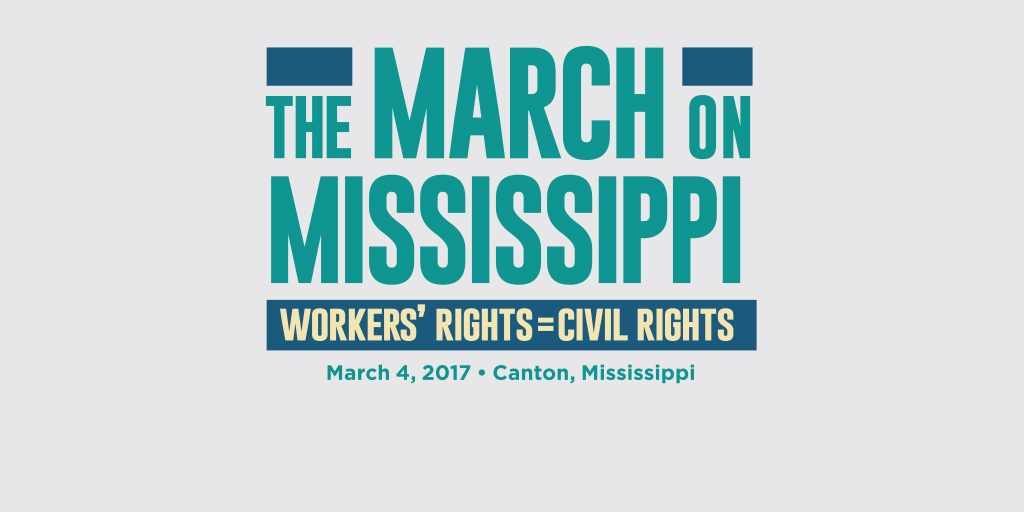 Citing Automaker’s Record of Harassment, Intimidation of African-American Workers, Protesters to Demand Company Respect Employees’ Right to Vote for a Union Without Fear of Retaliation

Canton, Miss. – Citing a pattern of civil rights abuses by Nissan against its predominantly African-American workforce in Mississippi, U.S. Sen. Bernie Sanders, actor Danny Glover, NAACP President Cornell William Brooks and hundreds of workers, civil rights leaders, and social justice advocates will converge on the automaker’s factory in Canton Saturday to demand that the company respect its workers’ right to vote for a union free from fear and intimidation.

The March on Mississippi – expected to be the largest protest to hit the Magnolia State in years – follows a series of rallies at Nissan dealerships that swept across the South last month. At each protest, local clergy and civil rights leaders hand-delivered letters detailing unsafe working conditions and mistreatment of workers in Canton — and calling for an end to the company’s anti-union hostility. Of the roughly 5,000 workers at the plant, an estimated 80 percent are African-American.

“I am proud to join in fighting to give workers at Nissan’s Canton, Mississippi, plant the justice, dignity and the right to join a union that they deserve,” said Sen. Sanders. “Nissan has union representation at 42 out of its 45 plants around the world. The American South should not be treated differently. What the workers at the Nissan plant in Mississippi are doing is a courageous and enormously important effort to improve their lives.”

“Powerful corporations like Nissan are the posterchild for America’s rigged economy,” said Danny Glover. “Nissan’s arrival in Canton promised good jobs for the community, but instead the company has committed rampant safety and health violations and denied its workers their basic right to vote for a union free from fear and intimidation. Nissan workers in Canton have my full support for their fight for fairness and respect at the workplace.”

The March on Mississippi will begin with pre-march speeches by Sanders, Glover and others at 12:30 p.m. CST at the Canton Sportsplex, 501 Soldiers Colony Road, in Canton. Protestors then will march approximately two miles to Nissan’s assembly plant to deliver a message to the company: Workers’ rights equal civil rights.

Nissan began operating in Canton in 2003 amid high hopes for Mississippi workers. The state gave Nissan $1.33 billion in tax breaks with the belief the company would bring good-paying, full-time jobs to the community. But despite expectations, Nissan has instead repeatedly violated the rights of its workers.

In late 2015, the National Labor Relations Board charged Nissan and a temporary worker agency with violating workers’ rights in Mississippi. The Labor Board found that Nissan unlawfully threatened to close the plant if workers union­ize; threatened employees with termination for union activity; and unlawfully interrogated employees. The Labor Board said that Nissan has “been interfering with, restraining and coercing em­ployees in the exercise of their rights.”

The Occupational Safety and Health Administration (OSHA) has issued multiple citations against Nissan for violations of federal safety and health laws. The most recent citations, issued in February, found that Nissan “did not furnish employment and a place of employment which was free from recognized hazards that were causing or likely to cause death or serious physical harm to employees.”

“Nissan employees are working under punishing production quotas and unsafe conditions in Canton, and the company does not respect our rights on the job,” said Nissan employee Morris Mock, who works on the paint line at the Canton plant. “We risk our lives every day because Nissan refuses to make the plant safe, and when we speak out to demand basic protections, the company threatens and harasses us. That’s why we’re joining together to demand the good jobs that our community deserves, and we don’t back down until we win the freedom to stand together in a union.”

Mock and other Nissan employees believe a union is necessary for them to collectively bargain with the company over safety issues and other matters. The NLRB describes collective bargaining as an effort to “bargain in good faith about wages, hours, vacation time, insurance, safety practices and other subjects.”

“The right and need to collectively bargain is not only a matter for the workers in the plant but their families at home,” said NAACP President Cornell William Brooks. “Without representation, workers and families, as well as rights and pay, are vulnerable. The NAACP stands shoulder to shoulder with those who are trying to build cars and a future for themselves — both demand a union.”

Nissan’s Canton assembly plant produces models including the Altima, Frontier, Murano, and Titan. The company recently touted that its Altima model was the top selling car among African-American consumers for 2016.

“Nissan spends hundreds of millions of dollars a year marketing itself as a socially responsible carmaker, even going so far as to brag about its appeal to African-American car-buyers. Yet behind the scenes, the company is violating the rights of the African-American workforce that makes those cars,” said Glover. “We’re speaking out because Nissan can’t have it both ways, and it’s time for car dealers and customers alike to understand the product they’re selling and buying doesn’t fit the image of what Nissan claims it’s producing.”

Statement from the UAW on status of Daimler Truck Negotiations

VIDEO: The Devil’s in the Details