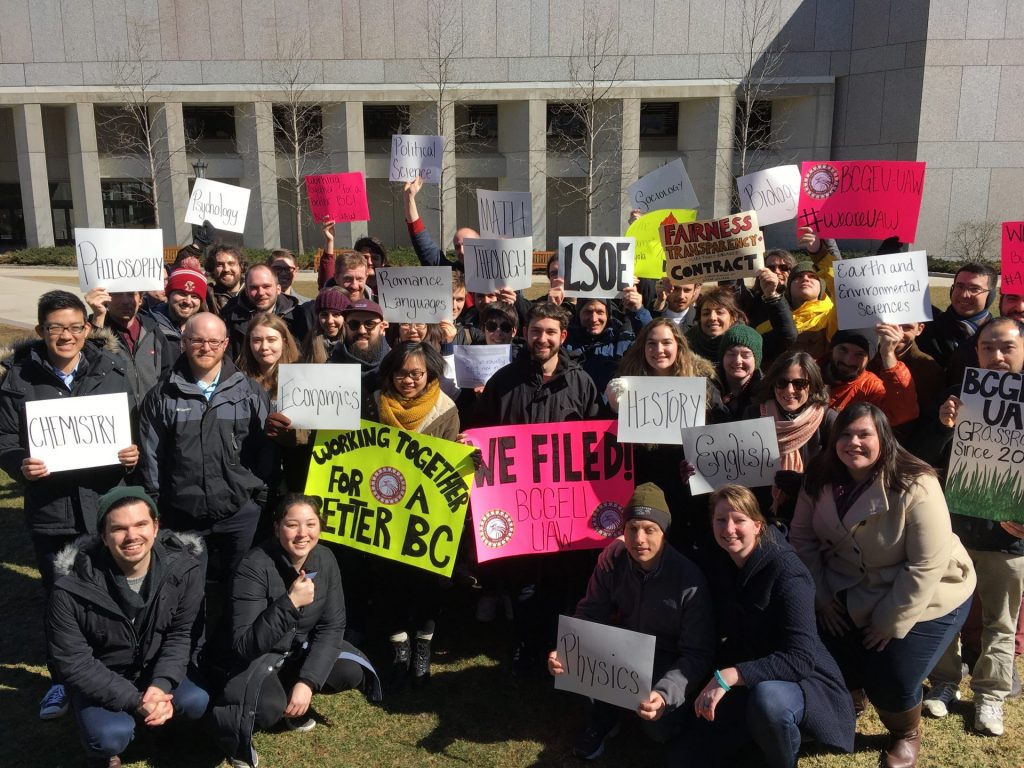 CHESTNUT HILL, Massachusetts—The Boston College Graduate Employees Union-United Auto Workers (BCGEU-UAW) today will deliver a petition for a union election with the regional office of the National Labor Relations Board (NLRB) in Boston. The filing follows the NLRB’s ruling in August that restored collective bargaining rights to graduate student workers, and is the result of two years of organizing by graduate employees at Boston College.

“It’s a thrilling moment for us after so much hard work,” said Sriram Natarajan, a Ph.D. student in economics. “And it’s great news for international students like me, to have our voices strengthened by a collective institution like the union.”

The committee will present the labor board with authorization cards signed by graduate and undergraduate employees from every school at Boston College, including the Morrissey Graduate School of Arts and Sciences, the Lynch School of Education, the Carroll School of Management, the Connell School of Nursing, the School of Social Work, the School of Theology and Ministry and Boston College Law School.

“It’s been a remarkable experience to see people come together around the idea of a union contract that can create the change that students in different schools and campus groups have been looking for,” said Kiara Manosalvas, a M.A. student in the Mental Health Counseling program in the Lynch School and chair of the Graduate Students of Color Association.

The NLRB requires that 30 percent of eligible employees sign authorization cards to file a petition. The next step will be an election held on campus at Boston College, which will require a majority of those voting to vote in favor of being represented by BCGEU-UAW. After the election, the union will elect its bargaining committee to meet with the employer and negotiate terms of a legally binding contract.

“I joined the union because graduate students should be able to work with our administrators to address our working conditions,” said Aaron Rose, a Ph.D. student in physics. “For example, there’s no way for a graduate student couple to afford child care in Boston. My wife and I had to save up for a year to afford part-time day care. A union contract will help us join other top universities in implementing family-friendly policies.”

“As a scientist and an international student, a union contract is crucial at this point in American history,” added Qingmei Cheng, a Ph.D. student in chemistry. “Not only will BCGEU-UAW help us address issues specific to our campus, but as UAW members we are part of an organization that fights for science on a national level and has lobbied for expanding the OPT program that helps international students find additional training in the U.S. after finishing their degrees.”

Graduate employees look forward to working with the Boston College administration to strengthen the university’s research and teaching. “It offers us the tremendous opportunity to strengthen our Catholic identity,” said Chris Staysniak, a Ph.D. student in history. “Catholic social teaching has long affirmed the dignity of organized labor, and by embracing this process Boston College can serve as a model of labor relations for peer institutions.”

UAW Region 9A Director Julie Kushner congratulated BCGEU-UAW on taking this step toward forming their union. “The level of organization and enthusiasm Boston College students have brought to building their union is inspiring,” Kushner said. “UAW graduate employees are making real gains at the bargaining table, and it’s an exciting time to be part of the movement.”