YOUR VOICE | YOUR UNION

The next dud in the chamber: Neil Gorsuch 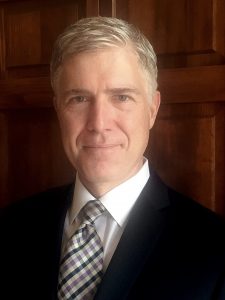 Stop Judge Gorsuch from being confirmed to the Supreme Court. He is not on the side of American workers.

If Judge Gorsuch is confirmed, he would continue to tilt the playing field away from working people and in the favor of corporations and the well connected. Working people deserve a Supreme Court justice who will be fair, independent and committed to protecting the rights, freedoms and legal safeguards that protect every one of us. Judge Gorsuch does not meet those standards.

The men and women who keep America moving forward by working in hazardous industries need a Supreme Court that understands the dangers they face every day, not a court stacked for corporations at the expense of hard working UAW members.

Load up on key information before the call to your Senator:

Judge Gorsuch has a track record of ruling in favor of employers who cheated their employees out of wages and companies that were penalized for unsafe working conditions that, in one case, led to a fatal injury.

Judge Gorsuch ruled in favor of a company that locked out Union employees, and voted to deny them back pay even when the NLRB found the employer in violation of the law for threatening to hire permanent replacement workers.

He has sided with employers who failed to honor seniority in the workplace, ruling against older workers who were demoted, and had their wages cut.

Judge Gorsuch could overturn long-established Supreme Court precedent giving the National Labor Relations Board and the Equal Employment Opportunity Commission the ability to interpret laws related to worker safety and fairness. That is a threat to the safety and security of all UAW Members and their families.

Judge Gorsuch even ruled in favor of companies that denied their employees’ healthcare coverage due to religious objections.

Judge Gorsuch is bad for UAW members and retirees. Judge Gorsuch sided with corporations and against pension holders in 91% of cases, and even let off an employer for intentionally misleading its employees by taking away retirement benefits. 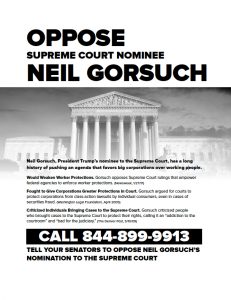