2020 UAW Legislative Conference ends with an eye toward November 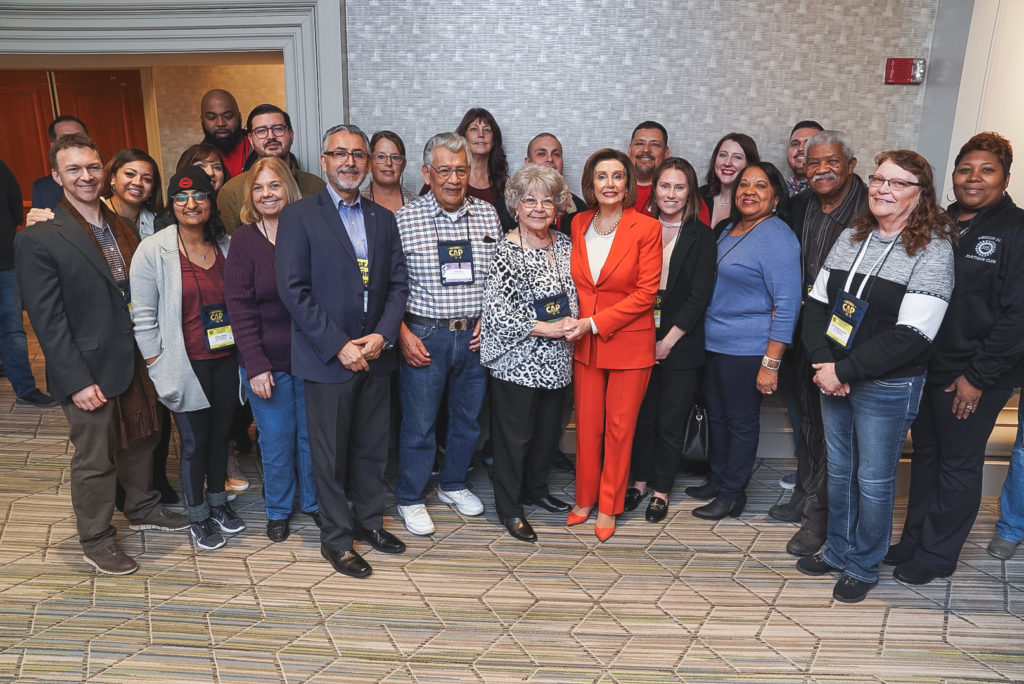 House Speaker Nancy Pelosi, the keynote speaker on the final day of the 2020 UAW Community Action Program (CAP) Conference, quoted Walter Reuther as saying, “We can make America the image of what it really stands for.”

UAW members must help make that a reality in the 2020 elections, Pelosi added.

“Are you ready to make a decision to win?” she asked the delegates, who responded strongly in the affirmative.

The Speaker laid out the measures House Democrats have passed – or intend to soon pass — to make Reuther’s vision a reality, including measures to limit the influence of dark money on elections, lower prescription drug costs, increase infrastructure investment and protect the right to organize. The PRO Act, which was expected to be voted on Thursday, would go a long way to punish employers who act illegally during organizing drives.

She also said the United States is at as critical time in its history. During the strife of the Revolutionary War, Thomas Payne wrote that “the times have found us.” With the impeachment of a lawless president who has dishonored the Constitution — and the Senate’s failure to act upon it — Americans face another critical juncture in the country’s future.

“There’s nothing that compares to this,” she stressed. “We face the times that have found us.”

Voting for a Democrat for president and flipping the Senate is the way to begin to fix America, she added. With CAP activists being the messenger of a better future for America, the serious problems the nation faces can at least be addressed.

“The times have found each and everyone of you,” she said.

Other speakers included two Ohio lawmakers who supported General Motors workers during last year’s  strike. They stressed that the same kind of commitment will be needed to make progress for working people.

U.S. Rep. Tim Ryan, whose district includes the now shuttered GM Lordstown Assembly Plant, reminded delegates of the promise President Donald Trump made to UAW members when he told them not to sell their homes because he guaranteed that the plant would stay open. President Trump is trying to portray himself as a friend to workers.

“Are you freaking kidding me?” the nine-term representative from northeastern Ohio said.

President Trump is no friend to workers as evidenced by his support for anti-union federal judges and appointments to the National Labor Relations Board and his efforts to dismantle the Affordable Care Act. Even his support for the new USMCA trade agreement did not have any protections for workers until labor-friendly lawmakers such as himself and U.S. Sen. Sherrod Brown demanded them. President Trump’s tax cut law blew a $2.3 trillion hole in the federal budget, a deficit he now wants to close by gutting Social Security, Medicare and Medicaid.

Rep. Ryan said UAW members need to remind everyone of the countless lies President Trump has made to the American people, particularly workers.

Sen. Brown told delegates that his Senate GOP colleagues will privately say they know President Trump is a liar and a racist but are afraid of him.

“The fear I see in the eyes of so many Republican senators – they just can’t stand up to him,” he said.

Winning the election will be difficult but it can be done by talking to voters one at a time and reminding them that President Trump has never had their best interests at heart.

“He’s betrayed the people you fight for every day,” Sen. Brown said.

U.S. Rep. Conor Lamb, a Democrat who represents Pennsylvania’s 17th congressional district, thanked UAW members for the support that helped him win a tight election in 2018 in a traditionally Republican district.

“We don’t have a lot of UAW members, but we had lots of UAW members come out and help us in our district to win a race by 700 votes out of 250,000 cast,” Rep. Lamb said. “People did think that the union movement was down and out, but I want to give credit where credit is due. Unions actually have it right about this thing called solidarity. It’s about people sticking together.”

as a major in the U.S. Marine Corps Reserves, praised UAW members for their support of veteran’s issues. “You reached out to them giving them purpose and support and something to be proud of when they take the uniform off.”

Rep. Finkenauer talked about running for office at age 28 with no money of her own, paying off student loans and up against “an opponent who could write himself a check for $500,000.” She said there were doors that were closed to her. “But what wasn’t closed was s a UAW union hall,” she said. “One of the things I know is that you never forget where you come from and who you fight for.”

Liz Watson, executive director of the Progressive Caucus Action Fund, told delegates that workers are beginning to once again realize that collective action. Work stoppages declined by 90 percent since the 1970s until a year ago. In 2018, 480,000 workers participated in a strike or other work stoppage. With the GM and Aramark strikes of 2019, those figures are likely to rise again. People are beginning to realize that the so-called economic boom has not made its way to them. The bottom half of the income spectrum only holds 1.6% of the nation’s wealth, she said.

“We know the truth is that the gains are being made for those at the top,” Watson said, adding that workers are realizing they must demand their fair share.

The Wednesday session included a panel discussion on redistricting and apportionment of seats; barriers to voting such as ID requirements and voter purging; and outright disinformation about polling places.  Panelists included Julie Houk, managing counsel for Election Protection at the Lawyers’ Committee for Civil Rights Under the Law;  Myrna Pérez,  director of the Brennan Center’s Voting Rights and Elections Program; and Hilary O. Shelton, senior vice president for Policy and Advocacy and director of the NAACP’s Washington Bureau.

“The tool of race is targeted directly at the labor movement,” Johnson said. “Don’t allow the tools of race to cause us to turn on each other.”

He noted that many other organizations depend on the UAW’s involvement in democracy.

“Stay strong. Stay together. Stay focused. If we stick with those stays, we can make democracy work for us all.”

UAW members feed kids going back to school this week