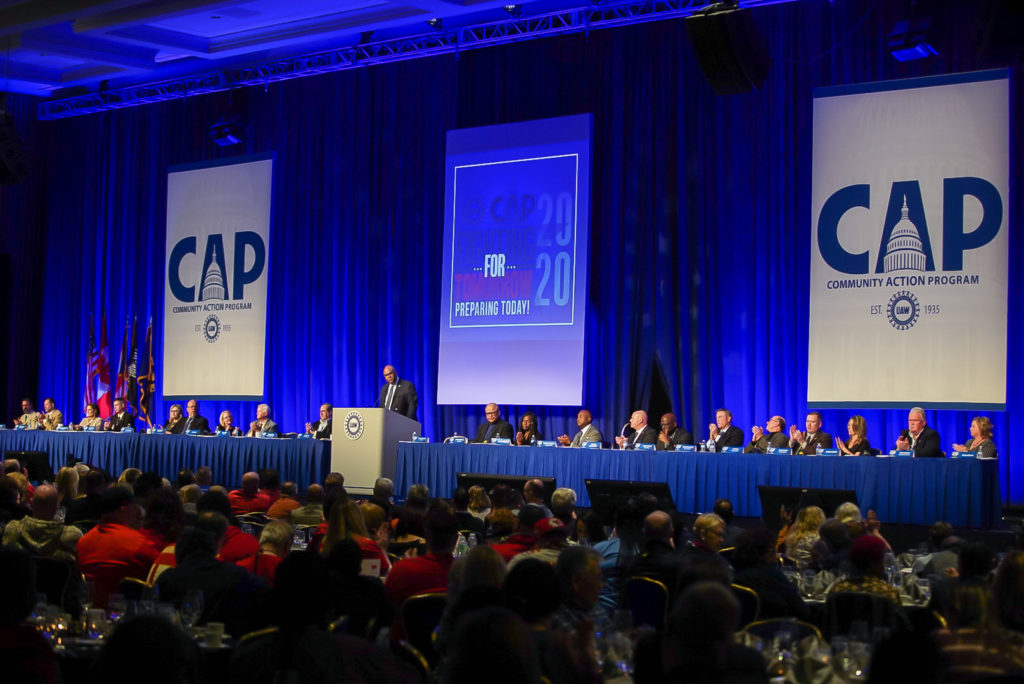 More than 1,000 UAW members and attendees, including members from Puerto Rico, gathered in Washington D.C., today to launch the start of the 2020 UAW National Community Action Program (CAP) Conference.

The four-day conference theme is “Fighting for Tomorrow-Preparing Today” and will highlight the UAW’s legislative and political priorities for 2020. This year’s conference, said CAP Director Melvin Coleman, will focus on the 2020 elections, international trade, job creation and other issues of importance to working families.

This week, members will gather information, plan and strategize during workshops on current policy issues. They’ll also hear from a range of speakers from the nation’s capital, including elected officials, labor leaders and political activists. On Tuesday, they will head to Capitol Hill to meet with their members of Congress.

Conference speaker Nikki Ware, who leads the U.S. Census Bureau’s National Partnership Program, urged CAP delegates to make sure their fellow union brothers and sisters know how important it is for the bureau to have an accurate count in the 2020 census. The National Partnership Program is responsible for building and strengthening relationships with businesses, unions, and industries and organizations with national reach to increase awareness and participation in the 2020 Census through nationwide outreach efforts.

The census is used to determine the number of U.S. Representatives each state has by population. An undercount could mean some states may have their congressional delegations reduced and impact their ability to win their fair share of federal funding and services. The census is also used by businesses to determine where operations should expand, where hospitals should be located, and for numerous other purposes.

Ware said minorities, LGBTQ, lower-income and other populations are undercounted and it partners with organizations such as labor unions to relay the message how important the census is to their lives.

“You are the trusted voice,” Ware told delegates.

Census officials expect 60% of the count to be online, with the remainder done by phone, mail and home visits.

Delegates also heard from Region 9A Director Beverley Brakeman, who said Puerto Rico, which is a part of her region and has 5,000 UAW members, is reeling from two recent major earthquakes. The island, she said, is still reeling from 2017’s Hurricane Maria.

People are sleeping in the streets because they are concerned about the structural integrity of their homes. “The effects have been felt over the entire island,” Brakeman said. “Our members in Puerto Rico are scared and they need our help.”

In the best tradition of the UAW, members took up a collection to help those in need. Delegates raised $6,100 for UAW members in Puerto Rico dealing with the storm disasters.

UAW Secretary-Treasurer Ray Curry delivered the keynote address as President Rory Gamble was unable to attend the conference due to health issues.

“Now we all know that we’ve got a big job ahead of us this election year,” Curry told the group. “And we’re going to spend this week getting ready to take on those anti-worker forces that would like to take us backward, that would seek to take away everything we’ve fought for over decades of struggles and victories for the working men and women of this country.”

Curry emphasized the union’s strengths and encouraged members to remember the power of the union and what it has accomplished.

“So, as you get ready to take the power of the UAW to Capitol Hill this week, know that we are fighting, as always, for our way of life and for every working man and woman in this country. And when we stand together, WE WIN!”